When science and technology meet social and economic systems, you tend to see something akin to what the late Stephen Jay Gould called “punctuated equilibrium” in his description of evolutionary biology. Something that has been stable for a long period is suddenly disrupted radically—and then settles into a new equilibrium.1Analogues across social and economic history include the discovery of fire, the domestication of dogs, the emergence of agricultural techniques, and, in more recent times, the Gutenberg printing press, the Jacquard loom, urban electrification, the automobile, the microprocessor, and the Internet. Each of these innovations collided with a society that had been in a period of relative stasis—followed by massive disruption.

Stay current on your favorite topicsSUBSCRIBE

Punctuated equilibrium is useful as a framework for thinking about disruption in today’s economy. US auto technology has been relatively static since the passage of the Federal interstate-highway act, in 1956. Now the synchronous arrival of Tesla, Uber, and autonomous vehicles is creating chaos. When it’s over, a new equilibrium will emerge. Landline operators were massively disrupted by cell phones, which in turn were upended by the introduction of the iPhone, in 2007—which, in the following decade, has settled into a new stasis, with handheld computing changing the very nature of interpersonal communication.

The evidence suggests that we are seeing a mass disruption in the corporate world like Gould’s recurring episodes of mass species extinction. Since 2000, over 50 percent of Fortune 500 companies have been acquired, merged, or declared bankruptcy, with no end in sight. In their wake, we are seeing a mass “speciation” of innovative corporate entities with largely new DNA, such as Amazon, Box, Facebook, Square, Twilio, Uber, WeWork, and Zappos.

Digital transformation is everywhere on the agendas of corporate boards and has risen to the top of CEOs’ strategic plans. Before the ubiquity of the personal computer or the Internet, the late Harvard sociologist Daniel Bell predicted the advent of the Information Age in his seminal work The Coming of Post-Industrial Society.2The resulting structural change in the global economy, he wrote, would be on the order of the Industrial Revolution. In the subsequent four decades, the dynamics of Moore’s law and the associated technological advances of minicomputers, relational databases, computers, the Internet, and the smartphone have created a thriving $2 trillion information-technology industry—much as Bell foretold.

In the 21st century, Bell’s dynamic is accelerating, with the introduction of new disruptive technologies, including big data, artificial intelligence (AI), elastic cloud computing (the cloud), and the Internet of Things (IoT). The smart grid is a compelling example of these forces at work. Today’s electric-power grid—composed of billions of electric meters, transformers, capacitors, phasor measurement units, and power lines—is perhaps the largest and most complex machine ever developed.3An estimated $2 trillion is being spent this decade to “sensor” that value chain by upgrading or replacing the multitude of devices in the grid infrastructure so that all of them are remotely machine addressable.4

When a power grid is fully connected, utilities can aggregate, evaluate, and correlate the interactions and relationships of vast quantities of data from all manner of devices—plus weather, load, and generation-capacity information—in near real time. They can then apply AI machine-learning algorithms to those data to optimize the operation of the grid, reduce the cost of operation, enhance resiliency, increase reliability, harden cybersecurity, enable a bidirectional power flow, and reduce greenhouse-gas emissions. The power of IoT, cloud computing, and AI spells the digital transformation of the utility industry.

A virtuous cycle is at work here. The network effects of interconnected and sensored customers, local power production, and storage (all ever cheaper) make more data available for analysis, rendering the deep-learning algorithms of AI more accurate and making for an increasingly efficient smart grid. Meanwhile, as big data sets become staggeringly large, they change the nature of business decisions. Historically, computation was performed on data samples, statistical methods were employed to draw inferences from those samples, and the inferences were in turn used to inform business decisions. Big data means we perform calculations on all the data; there is no sampling error. This enables AI—a previously unattainable class of computation that uses machine and deep learning to develop self-learning algorithms—to perform precise predictive and prescriptive analytics.

The benefits are breathtaking. All value chains will be disrupted: defense, education, financial services, government services, healthcare, manufacturing, oil and gas, retail, telecommunications, and more. To give some flavor to this: 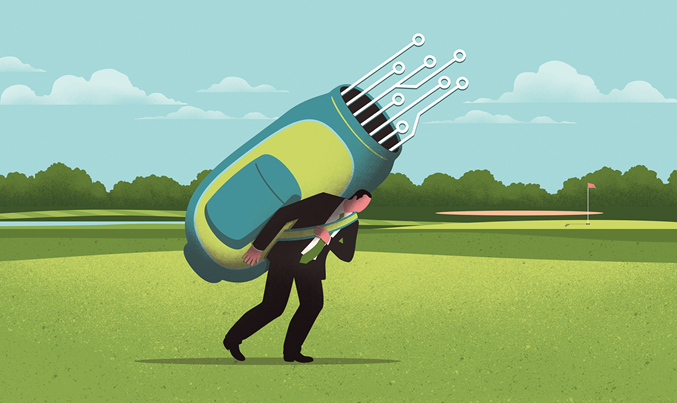 Big data, the Internet of Things

The new engine of change: CEOs

Perhaps the most unique aspect of this technology trend is that digital transformation is being driven from the top, personally mandated by the CEO. This is something new.

In the past 70 years of computing, the world advanced from the vacuum tube to the transistor to the semiconductor, from mainframe computing to minicomputing to personal computing to the Internet. Software evolved from bespoke custom programming to on-premises, packaged enterprise application software and then to software as a service (SaaS)—cloud-resident solutions. Among the fruits: increased productivity and profitability, a lower cost of operation, and economic growth.

I witnessed many of these tech-adoption cycles over the past 30 years. With the promise of performance improvements and productivity increases, such innovations were introduced to industry through the IT organization. Over months or years, and after multiple trials and evaluations, each gained the attention of the chief information officer, who was responsible for technology adoption. The CEO was periodically briefed on the cost and result.

With the 21st-century digital transformation, the adoption cycle has inverted. What I’m seeing now is that, almost invariably, global corporate transformations are initiated and propelled by the CEO. Visionary CEOs, individually, are the engines of massive change that is unprecedented in the history of information technology—possibly unprecedented in the history of commerce.

Something fundamentally important is happening, and it’s something that corporate leaders find highly motivating—and urgent. Michael Porter of the Harvard Business School speculates that the new world of smart, connected devices represents a sea change in the fundamental dynamics of competition.5Porter suggests that the Internet of Things isn’t simply a matter of competitive advantage; it is existential. More darkly, John Chambers, of Cisco Systems, predicts that 40 percent of today’s businesses will fail in the next ten years; 70 percent will attempt to transform themselves digitally, but only 30 percent will succeed. “If I am not making you sweat,” he told an executive audience, “I should be.”6

The competitive effects are playing out in the marketplace. In autos, think of Tesla as IoT on wheels. Tesla’s market capitalization is roughly equivalent to that of General Motors even though its revenue is less than one-twentieth of GM’s. Tesla collects terabytes of data from its vehicles and uses machine learning to improve predictive maintenance, self-driving capabilities, and the driving experience of its cars significantly and continuously.7The more miles driven, the more data Tesla collects, and the more it grows as a competitive force. A consumer can configure and purchase a customized new Tesla from the company’s website in eight minutes. In retail, Amazon is digitally transforming the industry with data, AI, and network effects. Its share of the US e-commerce market is 34 percent and could increase to 50 percent by 2021.8

In response, some farsighted CEOs are revamping their playbooks. Isabelle Kocher, CEO of Engie, an integrated energy company based in Paris, has assembled a C-suite team to step up the transformation of the company. Together they have updated its strategy with new business targets that include specific expectations for digital value creation. Other CEOs we work with are thinking through scenarios to anticipate future disruption, asking questions like “what are our customers really buying, do they really need us, or could a digital competitor provide a better insight or product at a lower cost?” They’re using these “what if” cases to break out of cloistered mind-sets and reallocate investments for future digital efforts. One healthcare CEO used scenarios to craft a road map for hundreds of next-generation application improvements across its businesses. Where new talent is required to bolster C-level efforts, CEOs are recruiting for roles such as chief digital officer with the authority and budget to make things happen.

Other CEOs are seeking inspiration by organizing visits to the headwaters of disruption, at companies like Apple, Tesla, and Uber. (My company has hosted more than 30 such visits in 2017 alone.) They’re retooling executive perspectives with boot camps on digital innovation. They’re also reaching across company and industry borders to share and promulgate best practices. In Germany, leading industry CEOs formed a working group, Industrie 4.0, to advise the federal government on industrial policy needed for the “fourth industrial revolution,” grounded in IoT and AI. Hundreds of leading companies have formed the Industrial Internet Consortium to accelerate the adoption of “cyberphysical systems” in energy, healthcare, manufacturing, smart cities, and transportation.

Digital transformation is about sweeping change. It changes everything about how products are designed, manufactured, sold, delivered, and serviced—and it forces CEOs to rethink how companies execute, with new business processes, management practices, and information systems, as well as everything about the nature of customer relationships. I’m seeing leaders who get this. They’re all over it: they want to launch five transformation initiatives right now; they’re talking to me and every digital leader they know about where the technology threats are coming from; and they’re hiring the best people to advise them. Yet I’m shocked by—even fearful for—the many CEOs I know who seem to be asleep at the switch. They just don’t see the massive disruption headed their way from digital threats, seen or unseen, and they don’t seem to understand it will happen very quickly.

So when I see CEOs who may be experimenting here and there with AI or the cloud, I tell them that’s not enough. It’s not about shiny objects. Tinkering is insufficient. My advice is that they should be talking about this all the time, with their boards, in the C-suite—and mobilizing the entire company. The threat is existential. For boards, if this isn’t on your agenda, then you’ve got the wrong agenda. If your CEO isn’t talking about how to ensure the survival of the enterprise amid digital disruption, well, maybe you’ve got the wrong person in the job. This may sound extreme, but it’s not.

It’s increasingly clear that we’re entering a highly disruptive extinction event. Many enterprises that fail to transform themselves will disappear. But as in evolutionary speciation, many new and unanticipated enterprises will emerge, and existing ones will be transformed with new business models. The existential threat is exceeded only by the opportunity.

teams and roles
BE PART OF OUR TEAM!
send your cv